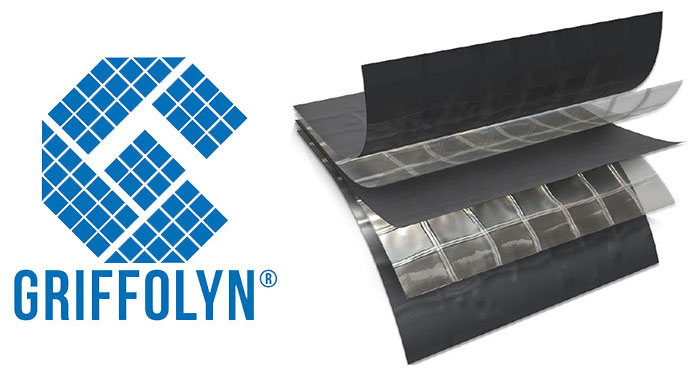 Walls, Ceilings, Under Slab and Roofing

Griffolyn® is an architectural vapor retarder recommended for under slab, walls and ceilings, and in roofing systems. It is estimated that air leakage through a hole of less than one square inch can allow passage of up to nearly eight gallons of water into the building envelope over the course of a single heating season resulting in mold and decay problems.

Griffolyn® vapor barriers effectively control air and vapor diffusion to reduce the amount of moisture infiltration into the building envelope. Made from durable and strong, internally reinforced polyethylene laminates, the Griffolyn® system withstands extreme temperatures and is highly resistant to punctures and tears.

Griffolyn® under slab vapor retarders and barriers prevent moisture from migrating into habitable space and causing problems such as deterioration of flooring adhesive, delamination, bacteria growth and warping. Even if new concrete is allowed to dry to the point where flooring can safely be installed, the absence or improper installation of a vapor retarder can later lead to expensive failures.

The need for an under slab vapor retarder in high humidity areas with high water tables is well understood. However, buildings in arid climates also need vapor retarders. Air conditioning the interior of the structure creates a significant difference in vapor pressure which causes moisture to be drawn out of the ground through the slab and into the space above.